Creating a blog was in my TODO list for too long, being too ambitious prevented it me from just getting it up. WordPress or Drupal + phpCAS or Java-based blog/CMS + Jasig CAS for Single Sign On between the blog + Asimio.net; it was too complex and time-consuming.

Earlier this year I read Soft Skills: The software developer’s life manual which I found it to be a really interesting book and that was it, I was decided to start a blog, but took a different route than what was suggested, it had to be simple and fun where I would learn something new in the process and after a day of quick research, I decided it to use Jekyll to generate a static blog and hosted it on Amazon S3 since I’m already using a couple of AWS services with Asimio.net.

In this post I’ll detail how to accomplish this and optionally, use Jenkins to implement a Continuous Deployment approach to automatically deploy the blog when new posts become available. It will also serve me as a short how to guide in case I decide to create a static site again.

In this section an S3 Bucket will be created to host a static website. Once completed it will serve a simple index.html page. 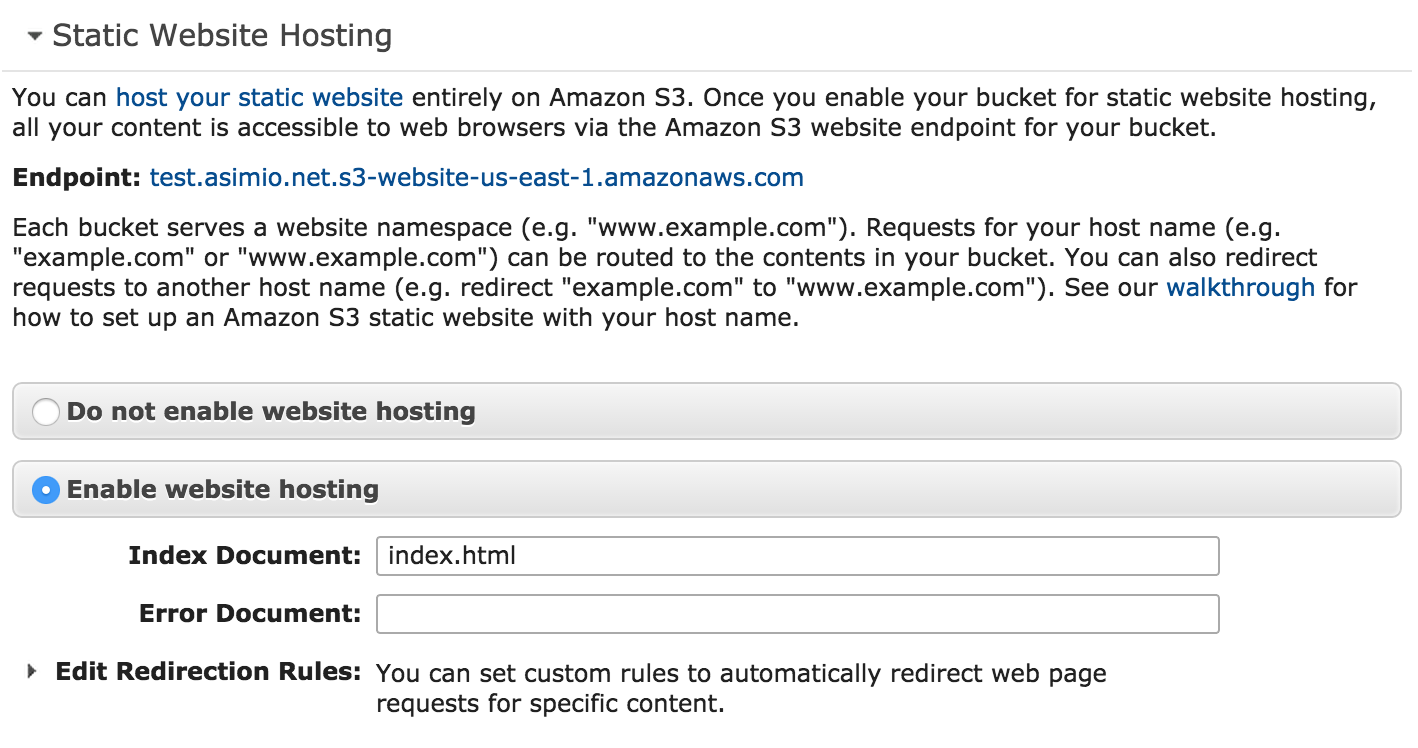 Make sure yours is updated to match your bucket name. Click Save to store policy and close the dialog and once more to save Permissions.

Now that an S3 bucket has been setup and it’s successfully serving a static .html file, let’s setup Ruby and Jekyll.

Tip: If you or your team use Java, you can also use an Amazon S3 bucket as your Maven repository to host binary artifacts.

Actually, before setting up Jekyll, let’s fix that weird static site URL.
I mentioned earlier that Asimio.net is using a couple of Amazon services, Route 53 is one of them, but my guess is that this should work with most DNS providers.
Since I’m hosting the blog as a subdomain of asimio.net domain, I just need to add a CNAME record for test.asimio.net:

This guide needed to be updated once I upgraded to OS X Sierra and needed to re-install Jekyll 3.1.x, the latest as of Revision #1, but was at version 2.5.x when this post was first published.

This post needed to be updated once I upgraded to OS X High Sierra and needed a clean install of Jekyll 3.7.x, the latest as of Revision #2, requiring Ruby version >= 2.1 while High Sierra ships with Ruby 2.0.

The last commands section includes a couple of gems that are used by this blog but are not required for test.asimio.net example site being set up.

Technically, jekyll would be the only gem needed, but tech.asimio.net uses Freshman21 Jekyll theme and it requires jekyll-sitemap and sass gems as well.
I would suggest to start a new project downloading an existing Jekyll theme, but for the purpose of this post, creating a simple one from scratch is fine.

In this section I’ll setup an AWS IAM User for publishing/deployment to AWS S3 purposes, install a useful gem, s3_website, along with its dependencies and configure it with AWS credentials. 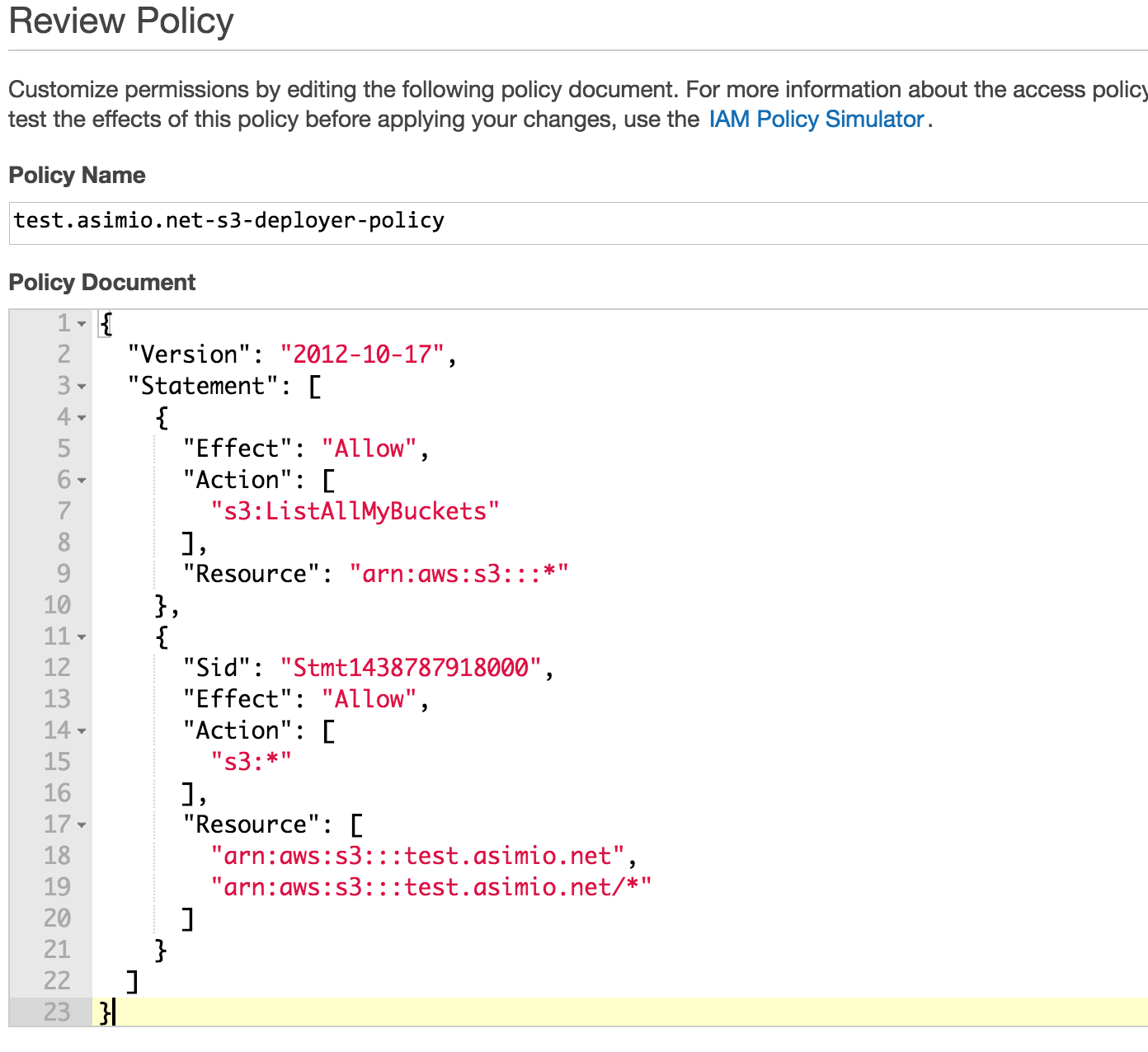 At this point, test.asimio.net-s3-deployer-user will be able to deploy/publish a site hosted on AWS S3.

This creates a file named s3_website.yml in the site’s root directory that would still need to be edited with credentials from previously created AWS IAM User, which could be found in the downloaded .csv file.
Open it and update these settings:

Save it and run:

I’m not using Cloudfront so:
I answered “N” to Do you want to deliver your website via CloudFront, the CDN of Amazon? question.

After changes are made to the site, it can be published executing:

I’ll go a step further, I’ll setup Jenkins to automatically deploy the site after a new post is added.

I would also like to prevent the site from building and deploying when there are meaningless changes, like checking changes into the site’s _drafts directory. The strategy I came up with was to create a Git branch for every new blog entry, work with this branch is done either in _drafts or _posts directories, once an entry is ready to be published, it makes it to the _posts directory of the branch and then merged it with master which should cause Jenkins to trigger build job.

Then add Post-build Actions -> Publish artifacts to S3 Bucket configured as shown below: 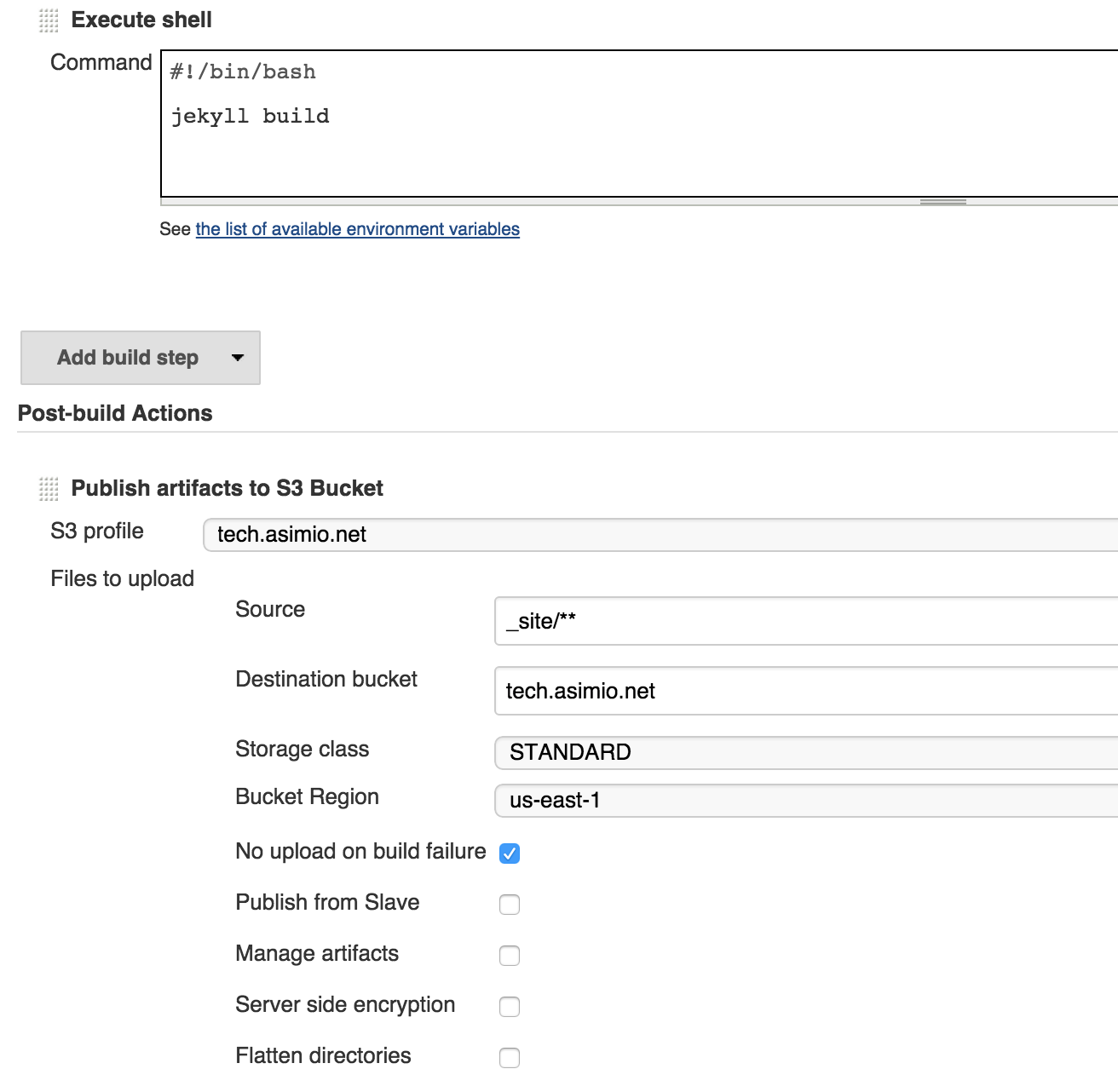 I recently landed on this blog entry and noticed there could be another improvement to the process I’m using to deploy my blog, include html-proofer gem to find broken links. I haven’t used it yet, but you might find it useful.