The N+1 SELECT problem happens when an ORM like Hibernate executes one SQL query to retrieve the main entity from a parent-child relationship and then one SQL query for each child object. 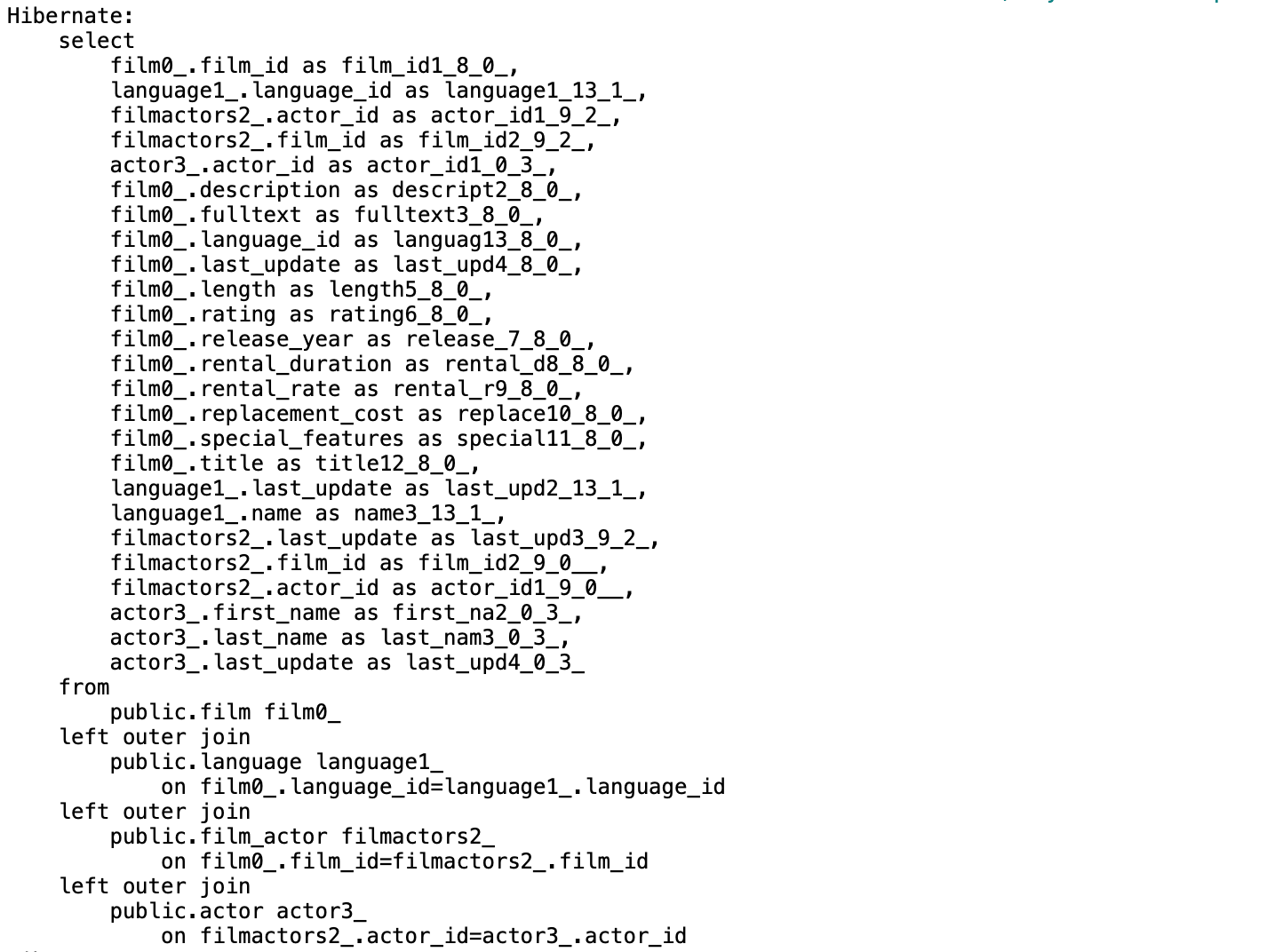 This blog post helps you understand what the N+1 SELECT problem is and how to fix it for Spring Boot applications using Spring Data JPA Entity Graph.

Let’s start with a partial ER diagram for the db_dvdrental relational database and its JPA mappings: 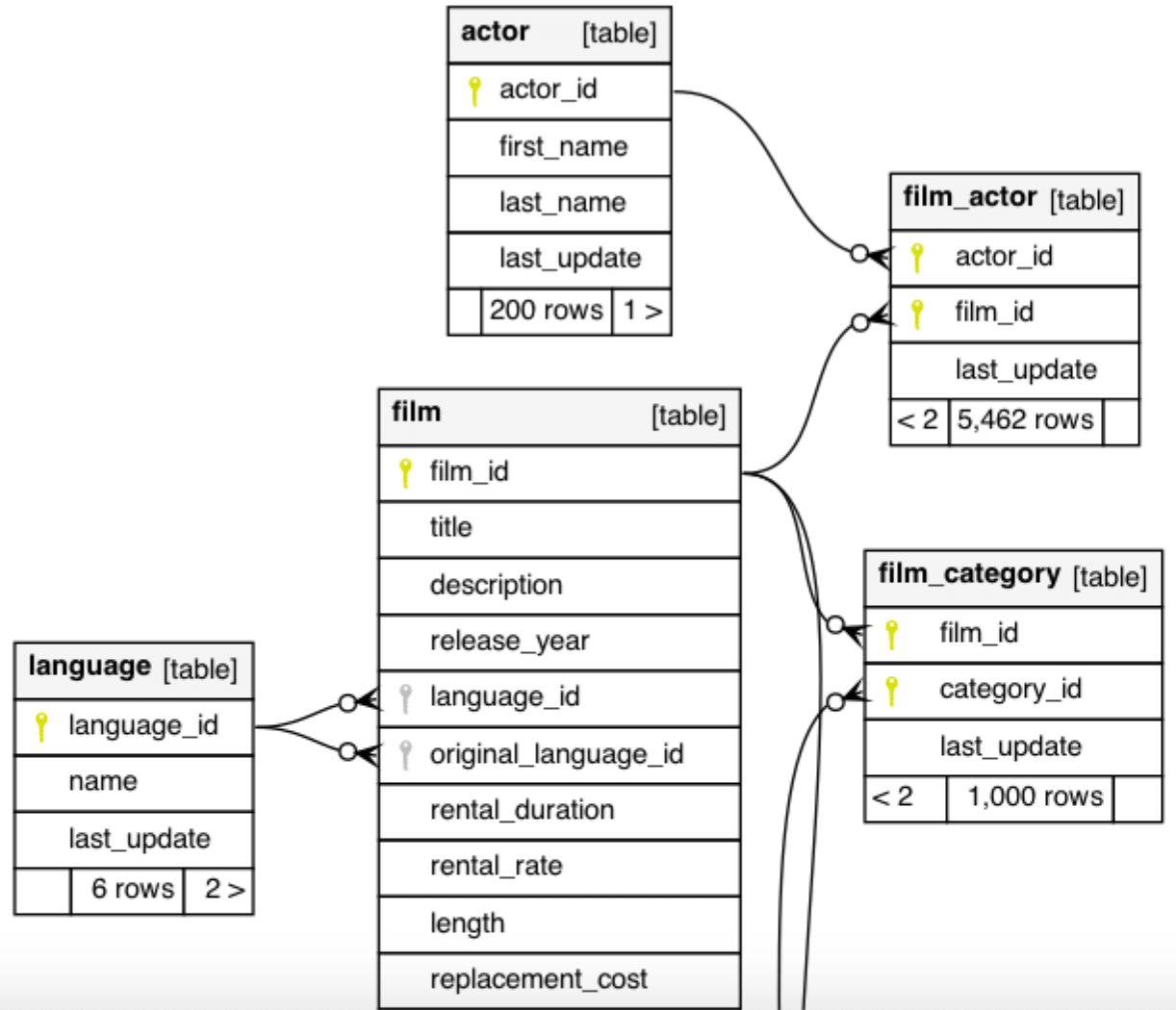 film, actor, film_actor, film_category, and language are the relevant tables which I’ll cover in this post.

Tip: Read on to learn how to document your relational database using SchemaSpy.

Important: EAGER fetching associations are simple to use but this strategy might load irrelevant data to your business use case. You’ll likely end up including many JOIN clauses in a SELECT statement impacting your application performance.

And that is it. For now. 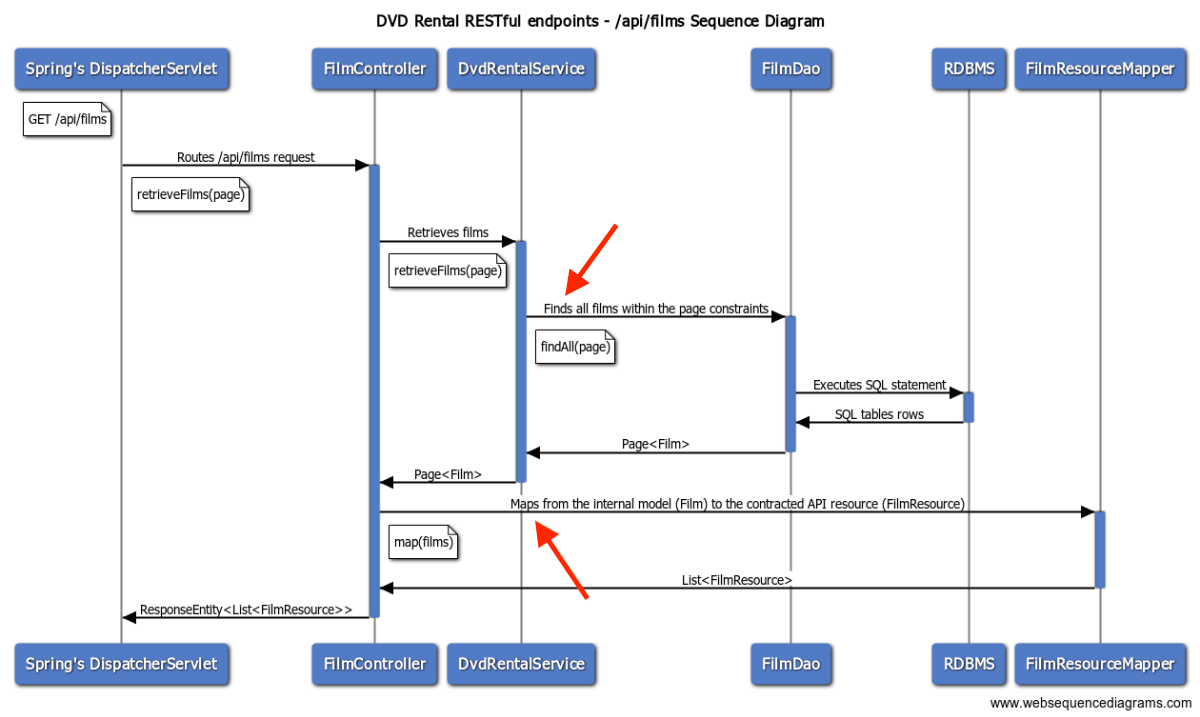 Sending a GET request to /api/films outputs these logs:

To illustrate the N+1 SELECT problem with an example:

If you retrieve two films, one with five actors, in English and the second film with eight actors, in Spanish, Hibernate ends up executing:

These add up to eighteen SELECT statements. A very inefficient approach to retrieve associated JPA entities. A lot of round trips to the RDBMS. You’ll very-likely have performance problems once your traffic starts to grow.

Before showing how to avoid the N+1 SELECT problem using @EntityGraph, let’s ask a question.

Where were these SELECT statements executed?

The first SELECT from the film table statement is executed via the FilmDao.findAll(page) method. The other SELECT statements are executed when the REST controller converts the Film entities to REST resources using FilmResourceMapper.

But the database transaction is committed after the execution of DvdRentalService.retrieveFilms() as a result of its @Transactional annotation, how does the mapping even work?

It works as a consequence of Spring Boot’s behavior of setting spring.jpa.open-in-view=true by default. This approach keeps the Hibernate Session open after a database transaction has been committed.

Important: The Open Session in View or Open Entity Manager in View is considered an anti-pattern.

Once you set spring.jpa.open-in-view=false, which is the recommended practice, sending the same GET request to /api/films fails.

The Entity Manager (wraps the Hibernate Session) is closed after executing DvdRentalService.retrieveFilms(). The JPA entities are in a DETACHED state and navigating through the filmActors or any other child entity throws LazyInitializationException.

How do you avoid the N+1 SELECT problem whitout using the Open Entity Manager in View pattern and preventing the LazyInitializationException?

You would have to eagerly-fetch the associated entities of the parent JPA entity. A few ways to do it are:

@EntityGraph, added in JPA 2.1 allows you to define which relations or associated entities to load for your specific use cases.

When retrieving Films using FilmDao.findAll(page), the @EntityGraph annotation causes Spring Data JPA and Hibernate to fetch the associated entities included in attributePaths according to the EntityGraphType specified, FETCH, or LOAD.

Notice attributesPath can also include the nested attributes of a JPA entity collection. filmActors is a collection of FilmActor. And @EntityGraph includes the actor associated entity via filmActors.actor.

This time sending a GET request to /api/films logs:

A single SELECT statement to retrieve Films and its associated JPA entities via JOIN clauses.

The N+1 SELECT issue will impact the performance of your Java application.

If you are already using Spring Data JPA to interact with a relational database, you can take advantage of its support for JPA’s @EntityGraph.

Spring Data JPA’s own @EntityGraph is easy to add to your existing repositories. It helps to execute only one SELECT statement preventing the N+1 SELECT problem.